Huawei’s sub-brand Honor has started rolling out the Android Marshmallow update for its Honor 5X smartphone in India. The phone was launched in the country in January this year running Android Lollipop. The Marshmallow update for the device is being rolled out over-the-air via the HiCare application in Asian regions including India. In addition to the usual Marshmallow goodies, the update also brings the brand’s new EMUI 4.0 user interface. 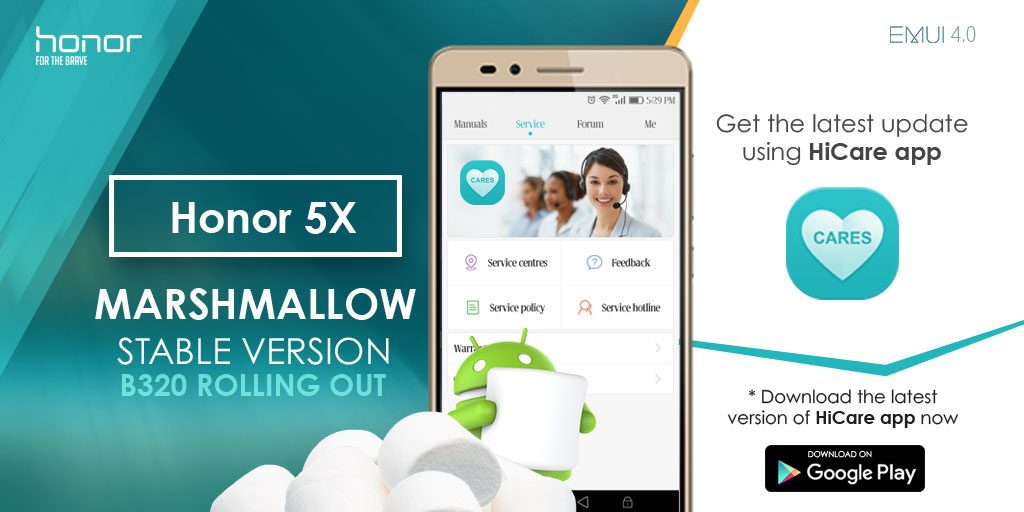 Honor hasn’t yet released the official change log of the Android Marshmallow update for the 5X at the moment. However, users can expect improved battery life thanks to the Doze Mode, enhanced system stability, improved system security, and features like Google Now on Tap. The update is being rolled out over-the-air, and is available via the HiCare application. To get the update, you can open the HiCare app, and select India as the region in the OS upgrade section.

If you wish to update , please follow the upgrade steps mentioned here Source

This website uses cookies to improve your experience while you navigate through the website. Out of these, the cookies that are categorized as necessary are stored on your browser as they are essential for the working of basic functionalities of the website. We also use third-party cookies that help us analyze and understand how you use this website. These cookies will be stored in your browser only with your consent. You also have the option to opt-out of these cookies. But opting out of some of these cookies may affect your browsing experience.
Necessary Always Enabled
Necessary cookies are absolutely essential for the website to function properly. This category only includes cookies that ensures basic functionalities and security features of the website. These cookies do not store any personal information.
Non-necessary
Any cookies that may not be particularly necessary for the website to function and is used specifically to collect user personal data via analytics, ads, other embedded contents are termed as non-necessary cookies. It is mandatory to procure user consent prior to running these cookies on your website.
SAVE & ACCEPT