We have already posted about the Oneplus development team pushing the OxygenOS 4 ( nougat ) for the OnePlus 3 and the OnePlus 3T. Due to some bugs in the official OOS 4.0, the development team has now rolled out Oxygen OS 4.0.1 OnePlus 3T. As the two flagship devices need to be released with the same Android OTA version, the manufacturer has now released the update for OnePlus 3 as well. However, not all regions may receive the OTA update at the same time. The Android 7.0 Nougat firmware will now show Oxygen OS 4.0.1 for OnePlus 3/3T. 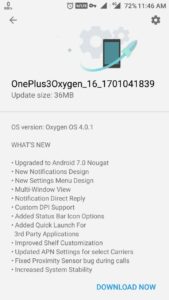 If you wish to get early Update Follow this video – https://youtu.be/IpuqAadlIq0