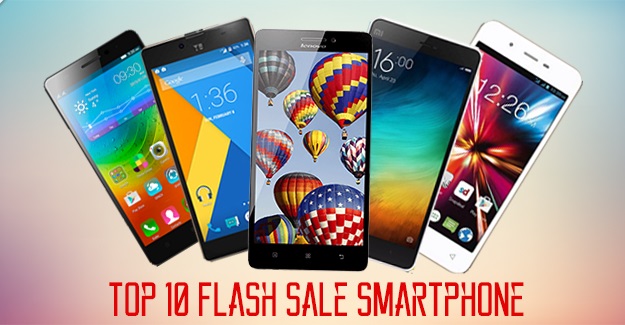 In 2015, Indian Smartphone market saw the boom of Flash Sale. There has been a lot of happening in the flash sale smartphone industry. Even though the concept started with Mi India, Even few traditional smartphone sellers like Lenovo and Micromax entered the flash sale market.

We @ FlashSaleTricks.com are working round the clock to bring out latest tricks and tips to buy these flash sale products and almost all of our users have gained advantage by using our auto-buy extensions and scripts. Also, since FlashSaleTricks.com is the only site which offers tricks and tips to buy products from Flipkart, Amazon, Snapdeal and Mi India, We have an enormous data which tells us clearly which smartphone is preferred by users.


We have worked on a list of smartphones which fared well in the sales and among our users who bought them. Here’s the list of
Top 10 Flash Sale Smartphones 2015

The only reason Vibe P1m is in this position is because of its sales quantity in the flash sale. But apart than that, Lenovo Vibe P1m is a solid mobile with good performance. It comes with a 5″ IPS HD display, quad-core processor, 2GB RAM, 16GB memory, 4000mah solid battery and supports 4g.

Yu Yunique is the second in line product from Yu. Even though there was a extreme rush and hype to buy Yu mobiles, our users were not really happy with its performance. It comes with 4.7″ HD screem 1GB RAM, 8GB Memory and supports 4G.
Buy Yu Yunique

Yu launched Yureka Plus as an upgrade to Yureka which is the first flagship model of the company. But it did not succees in doing so. Even though few users preferred for name and fame, many users were not happy with its performance. It comes with a 5.5″ FHD display, 2GB RAM, 16GB ROM, 13MP Camera and Octa-core processor.
Buy Yu Yureka Plus

Micromax canvas xpress 2 was launched via Flipkart flash sale. This smartphone received a moderate review among users but fared well in flash sale. This is also another low-range smartphone which comes with a 5″ HD display, octa-cre processor, 1GB RAM, 13MP Camera and 8GB internal memory.

Lenovo A6000 is the example of Lenovo’s commitment towards solid smartphones. Lenovo a6000 was preferred by a lot of midrange users and fared well in user reviews as well. It comes with a 1GB RAM, quad-core processor, 8mp primary cam, twin dolby speakers and also supports 4g.

Lenovo A7000 is a solid mobile with a very good review among users. It comes with 5.5″ HD display, quad-core processor, 2GB RAM and powerful Dolby-atmos speakers and also supports 4g.

Another impressive smartphone from Xiaomi. Ever since its launch in India, Xiaomi never fails to intrigue Indian smartphone users. Mi 4i is another favourite smartphone of 2015 loved by Indian users. It comes with a 5″ Full HD screenm 2GB RAM, 16GB ROM, 13MP Camera and supports 4g.

Buy XOLO One HD on open sale from Amazon