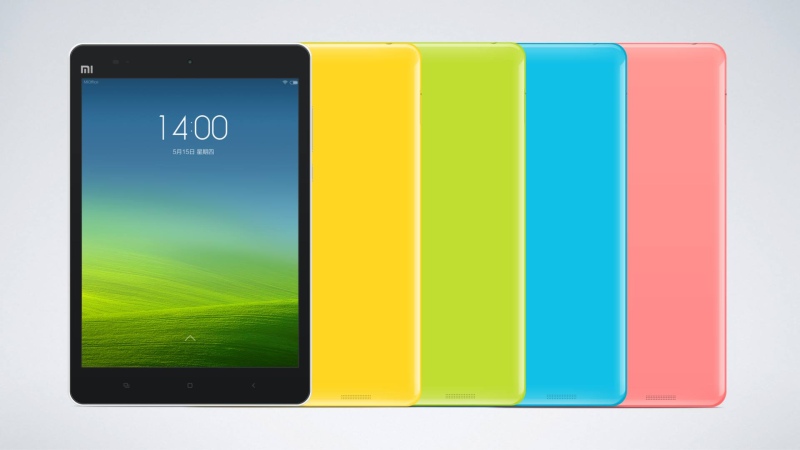 The Xiaomi MiPad 7.9 is, at first glance, a cheap version of the Apple iPad mini 2 – it has the same 7.9″ diagonal, the same 1536 x 2048 resolution and MIUI looks and acts more like iOS than Android, on which it is based. The design is almost identical too though they couldn’t quite match the slim profile. Made of glossy plastic, the Mi Pad 7.9 looks like the lovechild of an iPad and an iPhone 5c.

With a mix-and-match Apple design and a MIUI skin for Android 4.4.4 KitKat looking like a pretty convincing iOS clone you’re probably thinking you know where this is going. But Xiaomi just loves proving people wrong. If the screen resolution wasn’t a clue, the Mi Pad 7.9 has some specs that are sure to impress. This is the first commercially-available device to be powered by Nvidia’s Tegra K1 chipset combining a quad-core Cortex-A15 processor and a 192-core GPU for desktop-grade gaming graphics.

Xiaomi most certainly want their first tablet to make it big for reasons other than its likeness to Apple’s iPad mini. Yes, the similarities are just hard to ignore but Xiaomi probably thought there’s no such thing as bad publicity, especially when it’s their first tablet ever. Plus, they have the specs to silence the doubters. The Mi Pad has a stellar screen, a portable body, a chipset with great potential – especially for gaming – at a great price. Whether it’s the 16GB or the 64GB version, a Mi Pad 7.9 will set you back some €100 less than any direct competitor.

It is obvious too that MIUI has seen a lot of hard work, both from Xiaomi and the developer community, despite of the looks, which would make Apple copyright lawyers cringe.

The company has given up brick-and-mortar retail and sells all its devices via its regional online shops. They won’t sell to anyone residing outside of the official Asian Pacific markets. So if you don’t happen to live in the handful of countries they do business in (China, India, Indonesia, Hong Kong, Malaysia, Philippines, Singapore, and Taiwan), you’d have to go to a third-party online reseller to get one and hope nothing goes wrong or else you’ll need to ship your product back to a service center abroad.

Special thanks to HonorBuy.com for providing the review unit.

This website uses cookies to improve your experience while you navigate through the website. Out of these, the cookies that are categorized as necessary are stored on your browser as they are essential for the working of basic functionalities of the website. We also use third-party cookies that help us analyze and understand how you use this website. These cookies will be stored in your browser only with your consent. You also have the option to opt-out of these cookies. But opting out of some of these cookies may affect your browsing experience.
Necessary Always Enabled
Necessary cookies are absolutely essential for the website to function properly. This category only includes cookies that ensures basic functionalities and security features of the website. These cookies do not store any personal information.
Non-necessary
Any cookies that may not be particularly necessary for the website to function and is used specifically to collect user personal data via analytics, ads, other embedded contents are termed as non-necessary cookies. It is mandatory to procure user consent prior to running these cookies on your website.
SAVE & ACCEPT